An update about the Grand Central Artist in Residency Project:
In an effort to begin a project that reflected the needs of the community surrounding Grand Central Art Center, the months of March and April have been filled with a range of community building activities. In order to build a strong set of community connections we felt that it was necessary to conduct a number of creative team planning sessions within our own group and also with a variety of community groups located in Santa Ana. As an aspect of this process we have conducted outreach to El Centro, the Orange County May Day Coalition, the Teen Space connected to Santa Ana Public Library, and we also arranged meetings with a variety of community businesses and community members.

What is  “Social Practice Fieldwork”:
The community outreach process used to meet the community has been one of direct outreach and participation. This has included attending and direct participation in community discussion groups, and gender workshops, community bbq’s, May Day planning sessions, and other small meetings that have introduced a variety community members to one another.

We recently also attended the California State University Fullerton 8th Annual Social Justice Summit called Unite to Rise Above Apathy– through this action we ended up meeting and getting connected to a ton of social engaged community groups. And we hope to conduct some follow up meetings with many of the groups we met.

As an aspect of the direct participation in community and our outreach to community we have a also decided to work with community leaders as a volunteer  for skills and time needed to improve a website for the Orange County May Day Coalition. This is a work in progress. This aspect of our engagement with the community in Santa Ana has been completely rewarding.

The Storefront Studio Project:
During April, we participated in the Santa Ana Art Walk– this is the first time  that we activated the A.I.R studio. On the evening of the art walk we invited Silvia Juliana Mantilla Ortiz, to enact and perform Pura Cháchara which is part of  her larger project called Translation Nation. 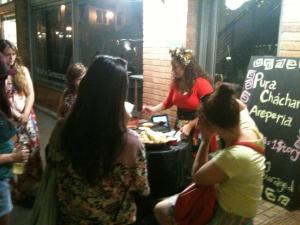 We also activated our window front and installed our audio stations by opening a storefront studio project called What is Democracy?. This aspect of the residency is a storefront project meant to connect with the communities opinions about the meaning of the word “democracy”. The storefront is open Tuesday through Friday from 4-7pm. We program special events, talks and public gatherings. Recently, Jules Rochielle and Christina Sanchez worked along with the Santa Ana Public Library team consisting of Cheryl Eberly and Zulma Zepeda to hold two young women’s identity discussions circles.

The Writing Component of a Social Art Practice:
The residency opportunity has also provided the opportunity for the artist to complete a number of writing projects. While in residency, Jules Rochielle recently published an article with Public Art Review for Issue 46 • spring / summer 2012— Food for Thought. The writing team consisting of, Jules Rochielle and Janet Owen Driggs recently completed a new piece of writing for a new second commission publication with Proboscis. This piece is currently being published and it will be the second part to the book set called Material Conditions I. This writing team also submitted a text about collaboration and “together work”for a book project that emerged out of last years Congress of Collectives. Jules is also currently producing a set of oral history interviews for the oral history aspect of Unfinished Business, 25 Years of Discourse in Los Angeles,LA Forum for Architecture and Urban Design

Upcoming Activities:
On April 29th, Silvia Juliana Mantilla Ortiz and Jules Rochielle will work with Arts Orange County lead a participatory movement workshop for the Día Del Niño” / Day of the Child. This event will take place at Birch Park in Santa Ana.

On April 30th, we were invited to conduct a set of student interviews about the word Democracy on the university campus of California State University Fullerton.  A big THANK YOU goes out to Bonnie Joy Massey.

May 1: May Day in Santa Ana: Community Story Collection and Protest.  During the busy month of May, we will be working at the individual and community level to directly participate in a variety of events associated with the Orange County May Day Coalition.  We hope to continue to work within the community to produce and capture an audio archive of the events taking place in Santa Ana.

May 2nd- May 5th: We will also be working with the artist Carmen Montoya during this time. We hope to run a set of community art making workshops with Carmen on May 2nd- May 5th. Carmen has been actively engaged with a group known as Pineros y Campesinos Unidos del Noroeste (Northwest Treeplanters and Farmworkers United), is Oregon’s union of farmworkers, nursery, and reforestation workers, and Oregon’s largest Latino organization.We are hoping to garner enough community support to be able to work with Carmen to create a set of powerful  images to take back to the Pineros y Campesinos Unidos del Noroeste.

May 5th: For the Santa Ana Art Walk:  We are also excited to announce a collaborative effort with a group called Evoke Unity. We will work together to activate the What is Democracy? storefront space and to engage the community. We met this dynamic young group of artists at  California State Fullerton 8th Annual Social Justice Summit called Unite to Rise Above Apathy.

Evoke Unity, is a grassroots project developed by undergraduates from the Art Department of the College of the Arts, was created to discuss cultural diversity and identity among today’s students. This installation brings to light that our campus population is made up of students from over 80 nations. Evoke Unity hopes to convey that our success as a university community is due in large measure to these diverse backgrounds and perspectives.

Saturday, May 12th – 3:30 to 5
A big ThankYyou goes out to Bonnie Joy Massey. Thank you for asking us to particpate”
Grand Central Art Center,125 N Broadway.Santa Ana CA 92701
Speakers:”Successes and Failures of Democratic Social Movements in South Africa.”Alan Emery, Assistant Professor of Sociology at CSUF “Reviving the Left.” Steve Jobbit, Assistant Professor of History at CSUF.
Stop by and participate in What is Democracy? an art project developed by artist Jules Rochielle. Record your opinions and your story about the meaning of democracy today.

May 17-May 21: The Open Engagement Conference in Portland Oregon:
Jules Rochielle and the (SPAN)Social Practices Art Network will be part of this years Open Engagement 2012. The residency has allowed time to be made available for some more of the archived interviews to be produced to share through a presentations at Open Engagement. We are also trying to co-write a short essay along with John Spiak for a publication that will emerge out of this convening.

Open Engagement is an international conference that sets out to explore various perspectives on art and social practice and expand the dialogue around socially engaged art making. The Open Engagement conference is an initiative of Portland State University’s Art and Social Practice MFA concentration. Directed and founded by Jen Delos Reyes and planned in conjunction with the Art and Social Practice students, this year’s conference features keynote presenters Tania Bruguera, Shannon Jackson, and Paul Ramirez Jonas. The work by these artists and scholars touch on subjects including politics, economies, education, and representation.

Student Voices at What Is Democracy? 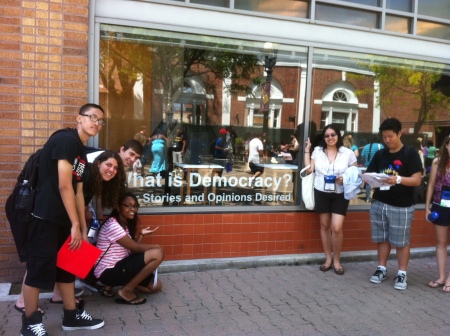 On April 21,2012: Today a group of students gathered for a diversity conference just stopped by to tell a few stories about youth and democracy.http://www.mcnc.us/professional-development/student-leadership-initiative/ —  at What Is Democracy, Grand Central Art Center.

Here is what they said about the word “democracy”

Beyond May…..well we have accomplished this much between March 6th and April 19th. There are many things currently being discussed with various community stakeholders in Santa Ana and we will post again as soon as we gain clarity about future activities.

This entry was posted on Thursday, April 19th, 2012 at 7:14 pm and is filed under Artist in Residence. You can follow any responses to this entry through the RSS 2.0 feed. You can leave a response, or trackback from your own site.

6 Responses to Field Report from Artist in Residence: Jules Rochielle