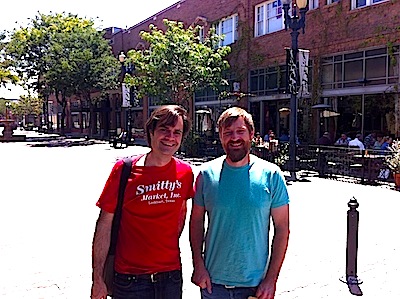 The journey of water is not a foreign concept to artist Matthew Moore; it is actually central to generations of his family’s lively hood.  For without the control of water, it would have been impossible for Moore to become the fourth generation of farmers in his family, sowing land in what would otherwise be considered hostile desert environment of western Phoenix, Arizona.

Through his artistic practice, Moore has found his artistic voice, while at the same time coming to a realization –the actions of taking raw desert/native land, converting it into fertile farming land by diverting water, and creating infrastructures, actually provides the perfect environment for suburban sprawl to occur.  He also realized that his practice of farming this land might actually exploit more natural resources than the subdivisions he was so quick to criticize.

Grand Central Art Center has invited artist Matthew Moore to reflect on his past works and examine their relationships and similarities to the impact of the LA Aqueduct, as Southern California marks that Aqueduct’s 100th anniversary on November 5, 2013.  Moore has invited artist/filmmaker Braden King to collaborate directly on the project.  Their residency will be approached in a very open model fashion, empowering the artists to invite other individuals (artists, writers, researchers, scientists, activists) they may identify, to join them during their residency.

Major funding support for this project provided by the Metabolic Studio.

More information on the artists can be found through the following links:

INTERNal Affairs: “Are You Cortez?”

This past Saturday Grand Central Art Center (GCAC) participated in another successful Santa Ana Art Walk with the opening of two new exhibitions: Beatriz Cortez’s The Time Machine and Eamonn Fox’s Solo Residency Exhibition for the Purposes of Furthering My Career. Those who experienced the opening night firsthand are fortunate enough to have been a part of the hustle and bustle of a very lively crowd. For those who missed the momentous gathering, allow me to relay the evening as it occurred to me, through the eyes of a GCAC intern. 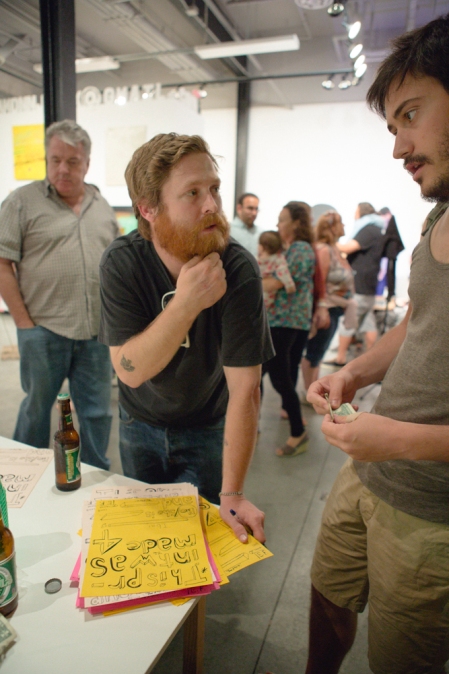 My role for the night was to greet our eager patrons while tallying the events attendance with the state-of-the-art silver handheld clicker-counter. The nature of my work demanded that I maintain post just steps away from the center’s entrance, which, as luck would have it, placed me directly in between the two galleries featuring the new works.

Bewilderment and intrigue painted the faces of visitors as they entered the gallery that is home to The Time Machine. This installation by Cortez serves as a visualization of a Salvadoran immigrant’s assimilation into the Los Angeles community. The devastated population that calls the war-torn El Salvador home has desperately sought refuge in places where they can maintain their culture without sacrificing their lives. This haven proved to be Los Angeles and Cortez’s work illustrates the integration of Salvadoran heritage with the Los Angeles lifestyle. The gallery is comprised of three parts: a shattered wall that has been reconstructed to include artifacts that can be seen through the cracks, a series of bones enclosed atop a mound of rubble, and a small wooden room in the center of the space that is to be experienced inside and out. To receive the full effect of Cortez’s amazing work, it is imperative to establish a basic context of her artistic vision. This contextualization can be achieved through a brief review of the wall placard, however, on this busy Saturday night a line quickly formed to enter the wooden room and thusly the wall text was blocked. As a result, I put my greeting duties aside to answer the inundation of questions; the most frequent being, “Are you Cortez?” I can see where my somber demeanor and outdated beret would lead many to believe that I was the brilliant artist responsible for this work, but alas, no; my talents lie in salutations and clicking. The true artist could be found, happy and even eager to discuss the depths of her project, ushering patrons into the gallery and periodically offering an impromptu-guided tour. 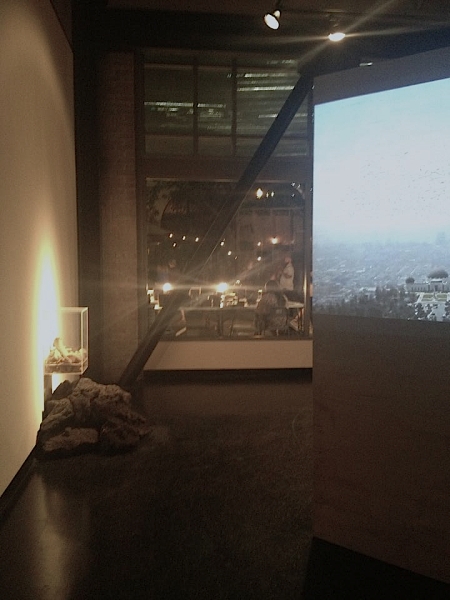 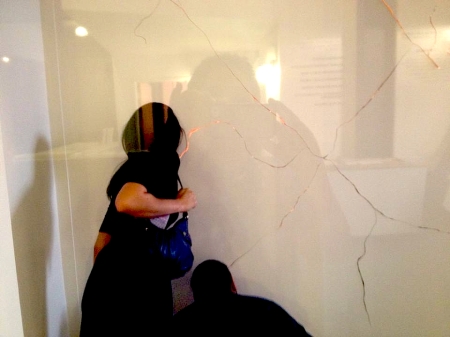 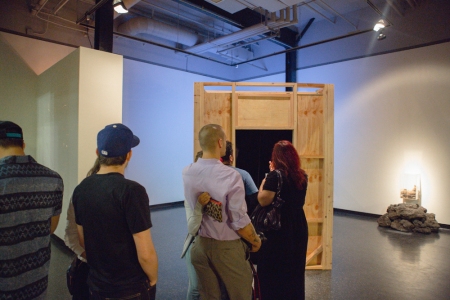 Fox’s installation across the hall is a nice contrast to Cortez’s work. An eclectic display of printmaking, sculpture, photography, drawings, and paintings, Fox used his space as a sort of experiment in art. Photographs complete with Fox’s clever memes, drawings, and written confessions are just some of the works that fill the walls. There is also a dartboard in the front of the gallery (adjacent to a giant image of a pizza) that invites visitors to challenge the artist to a game, while an electronic streaming sign located just above the board coerced participants to write a message that Fox would later Tweet. Fox’s vision is to create living, breathing, current-event art that is as unpredictable as everyday life. Fox aims to produce work that is both engaging and interactive.

To commemorate the opening of the exhibition, Fox invited guest artist Patrick Ballard to do a performance piece within the exhibition space. An array of neon lights illuminated the gallery and poured into the hallway followed by the organ-esque shrieks of Ballard’s keyboard. My view from the foyer was obstructed and I could bear the anticipation no longer; I abandoned my post and found a spot in the back of the growing crowd to witness the unfolding of the saga (I apologize to those who were not greeted while I succumbed to my curiosity). The keyboard’s cries conjured a creature from a makeshift doorway in the wall; the creature was wrapped in plastic and donned a paper bag on its head with a large ominous eye drawn on the front. The cycloptic being trembled in the doorway as Ballard (now resembling Cousin It of the Addams Family) hovered over the keyboard, methodically bobbing his head with each key he struck. This lasted a few moments longer until finally Ballard thrust his head toward the heavens and allowed a dye-induced blue liquid to drip from his gaping mouth. He then calmly caught his breath and drank from a bottle of water, and with that the piece was concluded. A common air of confusion, excitement, and intrigue lingered as the ringing in everyone’s ears subsided and the lights retained their normal glow. The crowd slowly dispersed and continued around the room. Due to my duties I had missed the masking of the creature, but I was present for the unveiling. Imagine my shock and awe when the one-eyed being removed the bag of anonymity and revealed himself as artist Mario Ybarra Jr.! The surprise twist of a guest artist within a guest artist’s performance left my mind spinning as though I had just experienced a fantastic dream in which an artistic inception had just occurred. We at GCAC were thrilled that Ybarra Jr. was not only interested in our gallery, but that he also felt so inclined as to lend us his creative talents for the evening. Ballard’s energetic performance served to further the creative explosion imposed by Fox, while provoking an attitude in the crowed that prepared them to effectively receive and participate in Fox’s work. 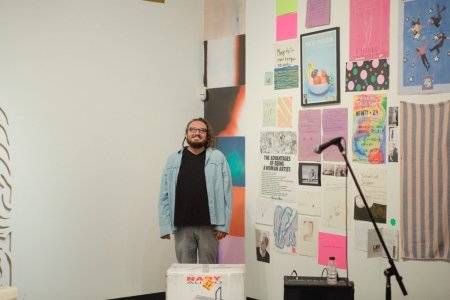 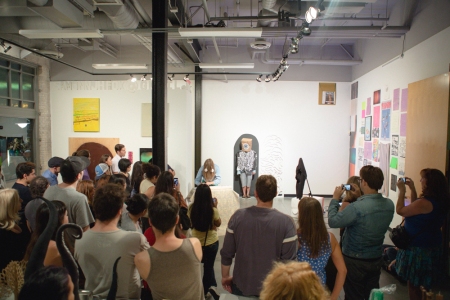 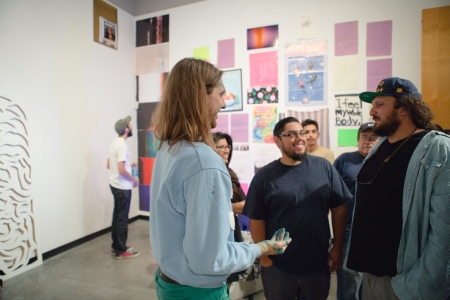 The thrill of the shiny new exhibitions could have potentially detracted from Nothing Else Left, Adriana Salazar’s work in the main gallery, but patrons were far from deterred. The three artists produced such different pieces that each gallery provided a completely unique experience. As the attendance monitor I am happy to report that there was a constant and steady flow of patrons throughout all three exhibitions for the duration of the evening. 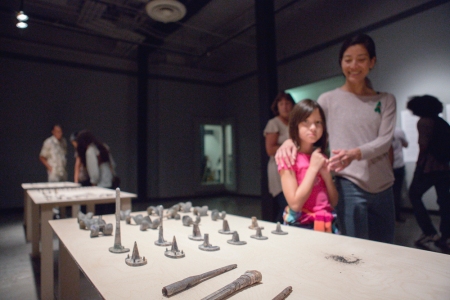 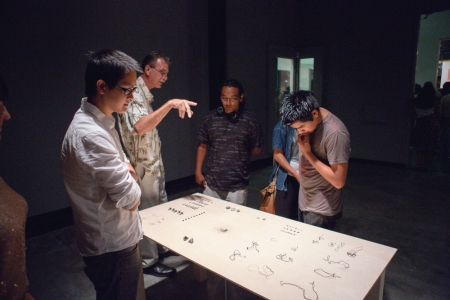 So, if you missed the jaw-dropping event that was last Saturday, I bet you’re writhing in regret after this epic ballad of events. Well, calm your troubled mind and rest easy; these exhibitions are open to the public FREE OF CHARGE, Tuesday through Sunday. But riddle me this art connoisseurs, are you hungry for the whole enchilada? Do you want to be amidst the excitement and energy that was experienced during opening night? Then cast yourself into in the eye of the artistic storm and be sure to join us each first Saturday of the month during the Santa Ana Art Walk. Eamonn Fox and Beatriz Cortez will be onsite during the walk for the next two months to meet you and discuss their works. I too will be there, and although I am not Cortez, I will make sure you are welcomed and your presence is accounted for. This is the GCAC intern, over and out.