INTERNal Affairs: The Writing on the Wall (Banksy Talk Review) 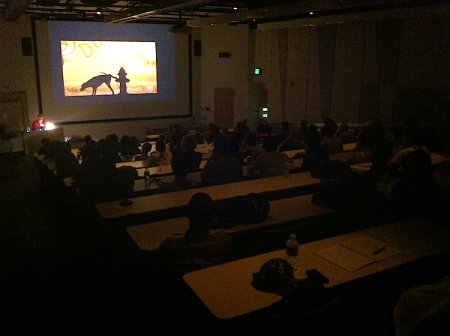 What is art? Is it hanging in a gallery? Is it made in a studio by hands that are finely tuned and well trained? Should it depict beauty? Should it represent an idea? Every generation conventionalizes a standard of “art” based on a definition ultimately defined by the critic. It has become the artist’s role to first establish these norms then defy them. Outspoken, cheeky, and veiled, the graffiti artist Banksy stands at the forefront of the contemporary fight for unconventional art. The British based street artist spent last October in New York during a “residency” in which he installed a new work each day. His imposition in the self-proclaimed art capital of America earned Banksy the scorn and smite from many of the city’s most reputable critics. However, artist, critic, and contributing editor to Art In America, Carol Diehl puts her well-earned reputation on the line to not only disagree with her colleagues, but to publically defend Banksy’s philosophy. Thanks to the collaborative efforts of Grand Central Art Center’s John Spiak along with Cal State Fullerton’s Chair of Visual Art Jade Jewett and Professor Joanna Roche, the main campus hosted the public debut of Diehl’s insights into the man who is the masked satirist. If you had the extreme misfortune of missing this talk, fret no longer! As always, you can experience it through me, your GCAC intern.

From blogs to print, during his “residency,” Banksy was reviled as what New York based critic Jerry Saltz calls, “amazingly unoriginal.” But was originality really his objective? Diehl identifies Banksy’s themes as a compilation of anti’s: anti-capitalism, anti-imperialism, anti-greed, and anti-war.  With such motives Banksy’s end goal isn’t ingenuity, it’s awareness­­­­­­­­— he offers a new perspective on the status quo. Diehl went on to highlight the deeply humanistic qualities of Banksy’s work, supporting her observations with the fact that his work “vilifies no one.” Diehl chalks up his disdain amongst critics to the sad fact that we exist in a “culture that’s constantly pitting one side against another,” inspiring a legitimate confusion when we encounter an attitude that blames no one specifically. 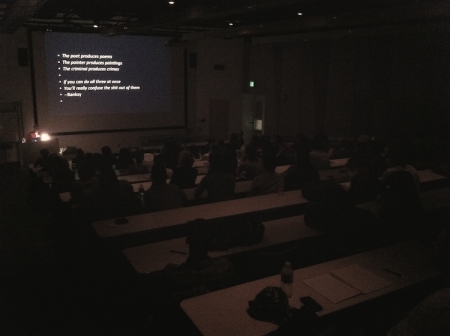 Diehl was careful not to disregard Banksy as the crude prankster that he is often made out to be. He is an artist with a message. His medium and surfaces are chosen concurrently with his ideals. Banksy is speaking out against the passive acceptance of a defined convention; he has to reach those who exist beyond the exclusivity of the tightly woven art world. Revolutions don’t happen from high rises, they happen in the streets. Thus, Banksy rids his work of pretense by using graffiti as his medium and existing utilitarian surfaces as his canvases.  He mocks the capitalist establishment while reaching his intended audience—everyone. He has taken his work out of the gallery and delivered it directly to the people.  I especially appreciated Diehl’s realization that graffiti is an illegal activity and as such, Banksy is literally risking his life to reach the public at large.

So what is art? Well I suppose that it is ultimately up to the viewers to decide, whether that be an experienced critic or an observant passer-by. Through the in-depth analysis provided by Carol Diehl, this intern is convinced that Banksy is not only an artist, but one of the great artists of our time. Intelligent and provoking, Banksy’s work must be experienced in its entirety. It is not just the image we see painted on a wall that demands contemplation, but the message deeply plaited within. He speaks a language understood by all and strips us of our differences; his work can be absurd because human beings are absurd, it can provoke laughter because we are all capable of humor, it questions normalcy because that is something that should be decided by the individual, not the committee. With a little help from Diehl and other Banksy advocates in the field, perhaps he will not be misunderstood much longer.

Well that’s my two-cents. If you missed the talk with Carol Diehl, this blog certainly does not do it justice. Hopefully we will be hearing more from Carol and with any luck her lecture will surface again soon. This is your GCAC intern, over and out.
–
–
– 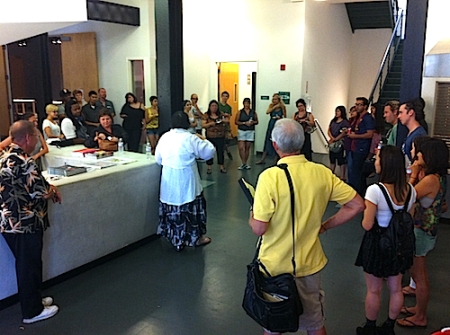 Tonight, Grand Central Art Center hosted the Art Grad Mixer organized by Christina Y. Smith, the new Graduate Program Advisor for Cal State University Fullerton’s Department of Visual Arts. The occasion, in honor of the students, provided the opportunity for all current visual art graduate students to meet, connect and be introduced to their Program Advisor. 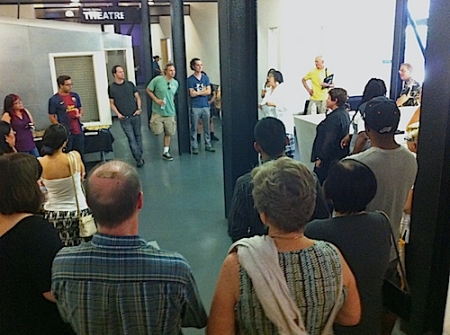 Thank you to all who attended and a special thanks to MEMPHIS at the SANTORA for their generous in-kind support of the evenings fantastic food!